Global challenges such as the pandemic and the Ukraine crisis have worsened the food crisis in recent years.

“The war in Ukraine has added to the disruptions caused by climate change, the coronavirus pandemic, and inequality to produce an “unprecedented global hunger crisis” already affecting hundreds of millions of people,” says UN Secretary-General Antonio Guterres.

Many countries worldwide are facing the threat of growing food insecurity reversing the gains attained over the decades in achieving the Sustainable Development Goals by 2030. Even before the pandemic, poverty and hunger have been on the rise due to climate change, disasters, locus ts, conflict situations, etc. In the past two years, with the loss of livelihoods and disruption in the food supply chain along with lockdowns, the situation has only worsened. The Ukraine war has added to the rising food insecurity and scare of food crisis with price inflation and disruption in the food supply chain, pushing millions into acute hunger.

"Many countries worldwide are facing the threat of growing food insecurity reversing the gains attained over the decades in achieving the Sustainable Development Goals by 2030."

The pandemic and the war have led to a rise in inflation around the world with looming food and energy prices.  According to the World Bank,  all countries irrespective of the income level have been hit by a price rise of more than 5 percent—most affected are 94 percent of low-income countries and not to spare 70 percent of high-income countries. As per the 2022 Commodity Markets Outlook, the war has transformed trade, production and consumption causing the price rise thus aggravating food insecurity and inflation. A rise in energy prices pushes the agricultural and production cost leading to higher food prices.

World food prices have jumped by 20.7 percent year after year leading to a surge in inflation. The war has aggravated the food price to 40 percent and the combined effect of the pandemic, climate change is reversing the global trends in reducing hunger and malnutrition. In the regions already affected by drought and famines, the prices rise and the food crisis is at its worst. Even the high-income food-secure countries such as the United Kingdom (UK) and the United States (US) are having an impact of cost inflation due to food insecurity. The situation is similar to the 2007-08 world food crisis that led to economic instability, food shortage, and price rise.

The 2022 Global Report on Food Crises shows an alarming level of hunger with 193 million people facing food insecurity due to conflicts, economic shock, and weather extremes. 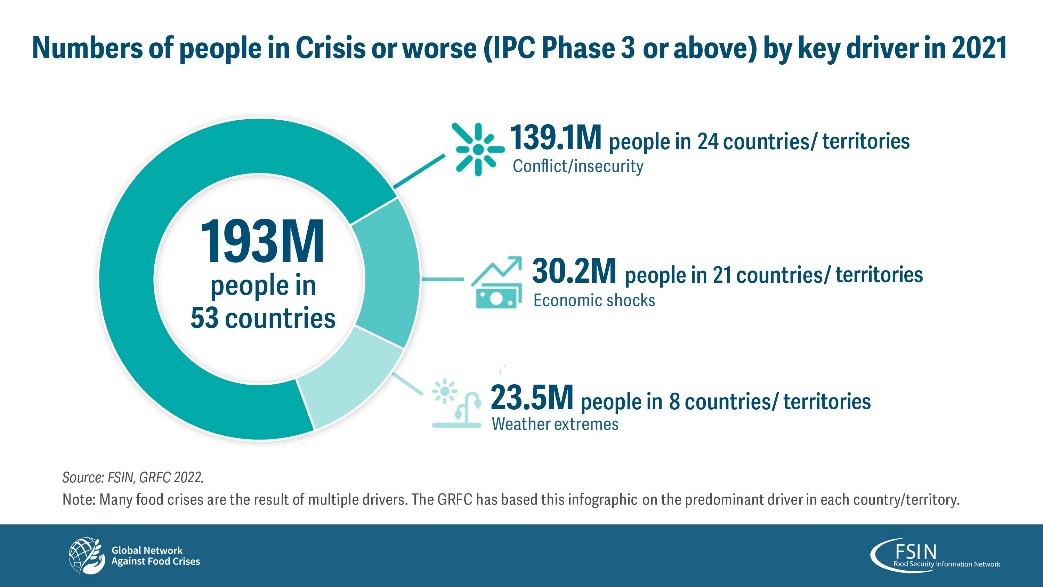 Another threat to food security is the growing population, projected to reach 9.8 billion by 2050 and 11.2 billion by 2100 from the current 7.6 billion. According to Food and Agricultural Organisation (FAO), ‘Overpopulation threatens the world food supply’ and could run out of food around 2027.

A 2022 rapid phone survey by the World Bank in 83 countries found reduced calorie intake and compromised nutrition by households during the pandemic. The food insecurity has a long-lasting impact of health and cognitive development in children. The crisies hs disrupted the food supply chain affecting the food production and also making the resources scarce and expensive.

"According to Food and Agricultural Organisation (FAO), ‘Overpopulation threatens the world food supply’ and could run out of food around 2027."

Malnutrition in children is high in countries suffering food crises for reasons of  food shortage, poor infant feeding practices, high childhood illnesses and lack of sanitation and clean drinking water. According to UNICEF, global hunger is pushing one child into severe malnutrition every  minutes in crises hit countries. With rising prices driven by Ukraine war and economic fallout with pandemic has led to a  disastorous level of severe malnutrition in children.

It is evident that the world is off-track to achieve Sustainable Development Goal 2 on Zero Hunger by 2030, with an estimated 840 million people to be affected by hunger by 2030.  The pandemic is increasing the susceptibility and shortages of global food systems, impacting the production, distribution and consumption of food. With 40 million more people facing food insecurity since 2020, it is worrying trend. There is need to tackle the undelying determinants of poverty and inequality to tackle food crisis.

The frightening high incidence of food insecurity and rates of malnutrition blatantly reveals the fragility of the global food systems further strained by natural disasters, the pandemic, rising conflict and insecurity, and food inflation. The Ukraine conflict has gurther aggravated the existing challenge of food insecurity faced by millions of people worldwide. The food shortage has further increased with impact on food exported via the Black Sea port from Ukraine and Russia. The two countries accounting  for 30 and 18 percent of world wheat and corn export.

"The frightening high incidence of food insecurity and rates of malnutrition blatantly reveals the fragility of the global food systems further strained by natural disasters, the pandemic, rising conflict and insecurity, and food inflation."

The conflict and instability put countries in reverse gear, where development gains are destroyed and livelihoods shattered. The United Nation General Assembly has adopted a resolution “state of global food security” at its 76th session for addressing global food crisis. A joint effort by governments, international community, civil society, private sector, and philanthropic organisations is needed to ensure global food security. Like the  leaders of G7 have committed to protect the vulnerable from hunger and increase global food and nutrition security. The situation is grave and calls for at-scale action to protect lives and livelihood, and integrated approach to address food crisis, climate crisis, and the impact of pandemic. There is need to invest in sustainable food systems  to ensure resilience building and recovery.

Stay Informed about the Latest News

Created by BlueLeaf.ch
Stay Informed about the Latest News
Sign up to our newsletter